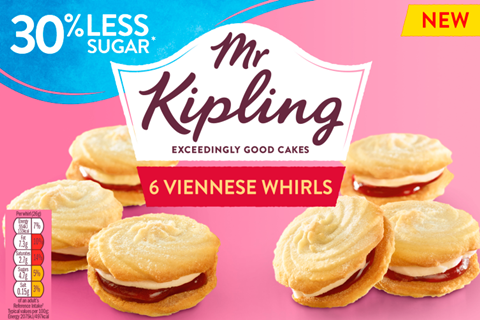 Mr Kipling owner Premier Foods has upgraded profit expectations for the 2021/22 financial year after assessing its progress in the third quarter.

Much of the progress made in Q3 was driven by sales in the branded sweet treats category, which delivered growth of 6.3% year on year and a rise of 11.6% compared with two years ago. Both Mr Kipling and Cadbury cake contributed to this strong performance, the company noted.

Cadbury cake grew sales across existing and new product ranges, the latter driven by Fudge and Crunchie cake bars. Mr Kipling, meanwhile, enjoyed its best ever Christmas trading period, according to the company, due to increased sales across all its core cake ranges and also healthier products such as reduced sugar Angel Slices.

“This performance continues to underline the popularity of our brands but also demonstrates the strength of our established branded growth model, with many of our brands supported by advertising campaigns and new product innovation during the quarter,” said Alex Whitehouse, CEO of Premier Foods.

Non-branded sweet treats were down in sales for Q3 compared with the corresponding periods from the last two years, however (7.4% and 14.3% respectively). This, said Premier, was expected due to the strategic decision to exit lower margin contracts. Nevertheless, taken as a whole the sweet treats category showed growth of 1.8% year on year in Q3, with sales also up on two years ago by 2.4%.

Overseas, Premier’s revenue in the quarter grew by 33% compared with two years ago. Sales judged against the prior year were 7% lower which the company said was largely due to pandemic-related elevated volumes and stock buy-in ahead of the EU exit in Ireland.

Following a successful test in Canada, the first shipments of the Mr Kipling cake test in the US have now been made and will go in store during the fourth quarter, Premier said.

Looking ahead, the group underlined commitment to its current five-point strategy of continuing to grow the core UK business using its branded growth model, investing in its supply chain infrastructure, expanding into new categories in the UK, building international businesses and broadening its existing portfolio with ‘modest bolt-on acquisitions’.