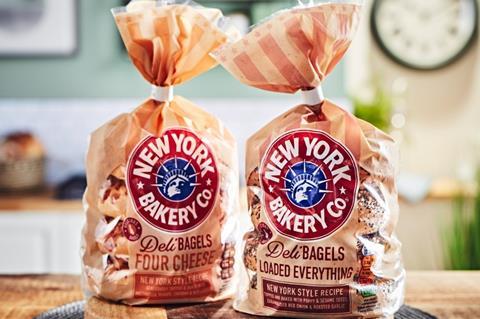 The ‘fancy-schmancy’ Deli Bagels come in two variants – Four Cheese and Loaded Everything. The bagels will be available for an rsp of £1.80 for a pack of four from 5 November in Asda, Sainsbury’s and Waitrose stores nationwide.

Inspired by the American neighbourhood deli, the new offering aims to drive value growth and incremental sales by attracting new consumers to the fixture and meeting the needs of the growing lunchtime occasion, it said. NYBC’s sales hit £73.8m for the 52 weeks ending 12 September 2020, up 12% year on year, according to data firm IRI.

“Our Four Cheese and Loaded Everything Deli Bagels really are ‘fancy-schmancy’. Our primary focus from the start was to deliver an unforgettable taste experience with flavours designed to deliver the added value that goes hand in hand with a premium range,” said Christina Honigfort, head of marketing at New York Bakery Co.

The brand also noted insight from Kantar which said there were 6.6m new bagel lunchtime occasions in the past six months.

The launch will be supported by an adverting campaign, which shows a clear New York vibe with a tongue in cheek confidence and celebration of food as a real hero, NYBC added.

“Our belief is that premium must never equal boring. People want fun, variety and something a bit different. That’s why our accompanying creative campaign to support the range humorously brings the very ‘New Yorky’ words, ‘fancy schmancy’ to life, with full focus given to the bagel.”