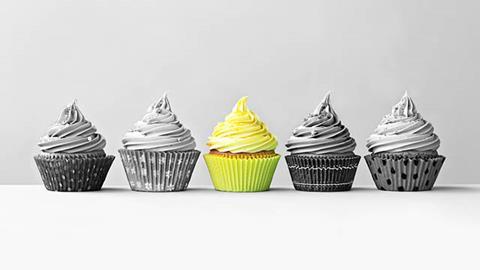 Veganuary: How to make bakery products stand out

Veganuary will bring a flood of new launches that will make the burgeoning plant-based market more crowded than ever.

Many players are looking to get a piece of the vegan action with a flurry of launches hitting the market in the past year.

“The UK launched more vegan products than any other nation in 2018,” explains Colin Clark, head of strategy and planning at agency Five by Five. “While it’s estimated only 3% of UK consumers are vegan – demand for vegan food is driven by a much broader consumer base.”

So, in an increasingly busy marketplace, how can brands make their vegan-friendly bakery products stand out from the crowd?

“There are not many people who are going to be able to emulate what Greggs did with its vegan sausage roll,” believes Vhari Russell, founder of marketing agency The Food Marketing Experts.

“The consumer is effectively going on a blind date with your product, so you have seconds to convince them this product needs to be in their basket.” 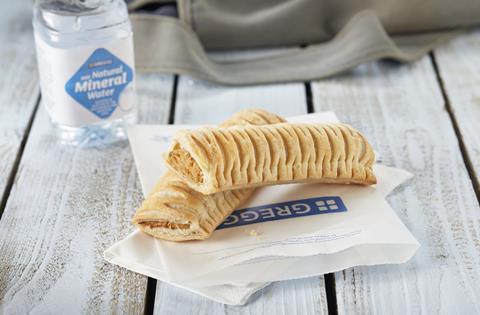 Should you target vegans or cast a wider net?

Understanding your audience is the first step, as confusion here will lead to problems down the line.

“Alongside your marketing team, you need to decide whether to target vegans exclusively, or a wider audience. This needs to be decided before NPD even starts – without a consensus here, your messaging will be muddled,” Clark adds.

With 92% of plant-based meals in the UK consumed by non-vegans last year, according to Kantar estimates, Clark believes a wider audience is the most viable option.

“It’s sensible to launch to as wide an audience as possible. As long as the product is up to scratch, there’s no reason it should be limited to just a ‘traditional’, core vegan audience. It’s not just vegans who want to eat meat/egg/dairy free, so if you don’t exclude those people, you’re onto a winner.”

One barrier with this approach, according to Orlaith Wood, writer at marketing consultant Reed Words, is convincing non-vegans that a meat-, egg- and dairy-free product is as tasty as anything else on the shelf. 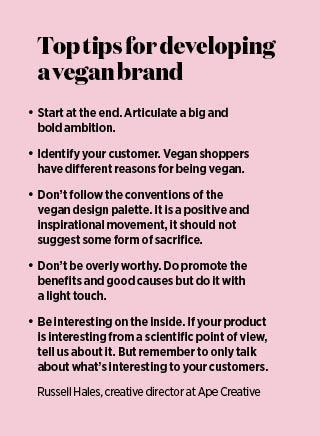 The tone of voice and messaging takes time to develop, just as a brand name, logo and packaging design would. Copy-driven brands, she adds, really stand out in the vegan market, with Oumph! sending a strong message about flavours while This (This isn’t chicken…) playfully gives consumers an idea of what to expect from its products.

“When it comes to positioning your brand, avoid the preachy language associated with the vegan and free-from food market. Ethics are a factor when it comes to our food choices, but at the end of the day it all comes back to flavour,” Wood says.

However, there are differing opinions on whether casting a wider net is the better option. Some believe targeting a niche audience could prove more successful for start-ups and smaller brands.

Regardless of your chosen audience, don’t just slap a big vegan sign on the front of pack. There’s a myriad of reasons why someone may choose a vegan product and/or lifestyle, including concerns around animal welfare, environmental motivations and wanting to be healthier.

Avoid the preachy language associated with the vegan and free-from food market. Ethics are a factor when it comes to our food choices, but at the end of the day it all comes back to flavour

“Vegan is a valid signpost and should be clearly communicated, but if your brand is communicating and behaving in a way that is aligned with your customers they should know what your product is about anyway,” Hales adds.

Authenticity is important here as consumers often know when something isn’t authentic. 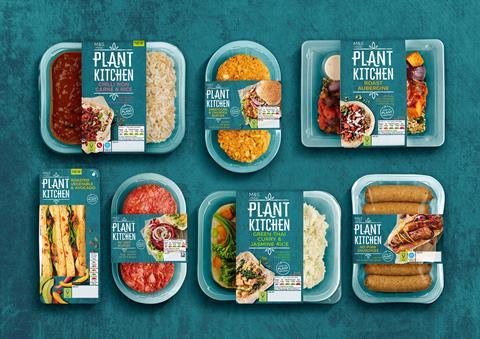 Pack a punch in the market

All these messages can be conveyed through packaging and labelling to help create genuine shelf appeal. Standing out is vital.

“Looking and behaving the same as the competition simply promotes the rest of the fixture. Challenger brands challenge market leaders and the norms of their category, and that’s how we create ‘stand-out’,” explains Hales.

Colours are key. Clark suggests using natural and vibrant colours for products such as cakes – a line of thinking backed by Russell, who advises either going really colourful or eye-catching and clean.

“The brands that get it wrong conform too much to category convention,” believes Steve Irvine, creative director at brand design agency Coley Porter Bell.

“They look like the old stereotype of vegan food: bland, barely edible, and in drab colours. When you think of vegetables, they’re some of the brightest naturally occurring colours we ever see, and the packaging needs to reflect that energy and vibrancy in its design.”

This is exactly what Coley Porter Bell (CPB) did for M&S’ Plant Kitchen range, which includes a Margherita Pizza, Roasted Veg Sandwich and a Sweet Potato Biriyani Wrap. CPB took inspiration from the street food and foodie festivals scene – a place where vegan-friendly food is thriving.

“We broke the normal conventions of product shots on a plate and gave it a really modern feel, away from the wilted green colours of normal vegan branding. A specific, category-defining blue helps differentiate the range from others and creates instant standout on the shelves,” adds Irvine.

Brand launch: where less is more

“Spend less time launching lots of products and invest more in each launch. If a job’s worth doing, it’s worth doing right,” explains Five by Five’s Clark.

“Seventy-five per cent of FMCG product launches fail in the first year, so launch loud and clear.”

Securing awards and accreditations for your products is an excellent addition to any brand, according to Russell, as it sends a signal of quality to consumers. This could include acquiring accreditation from The Vegan Society, which has an established and recognised trademark.

“We’re seeing more brands launch in a number of independent stores so they can enter awards, such as the Great Taste Awards, and then launch into the mainstream once those have been secured. That’s a very strong position to be in,” she adds. 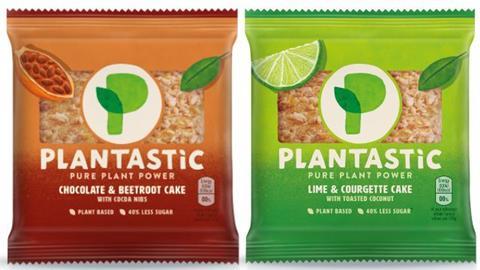 In May, Mr Kipling owner Premier Food unveiled plans to launch plant-based products under a new brand called Plantastic. The range – which is due to be available by the end of the year – will include desserts, cakes and soup that are all made from plant-based ingredients.

So, what do the experts think?

Plantastic is very explicit about its credentials, believes Hales from Ape Creative. However, he raises concerns about the taste credentials portrayed by the packaging and design.

“Plantastic would appeal because its colour palette and overall impression suggest it’s a healthier choice. But it leaves us thinking we might be sacrificing taste as a result,” he says. “It needs to dial up its taste credentials, and we’d seriously consider its naming and messaging strategy. Plant anything is starting to sound very tired and me-too already.”

This is a view echoed by Clark at Five by Five, who believes the imagery used is confusing.

“Leading with the brand name rather than the product means you have to read closely what the product is underneath – people do like to see what they’re eating before they buy, and the image doesn’t match the description below. Plus, with Plantastic being a new brand, it’s hard to sell on brand name alone,” Clark says.

However, he praises its plant-based focus, with no outright statement that the products are vegan, which could be off-putting to some consumers, and he admires the use of bold colours.

“The simplistic, bold colours don’t mess about. It’s refreshing to see something that’s not coming at you with 100 different USPs.” 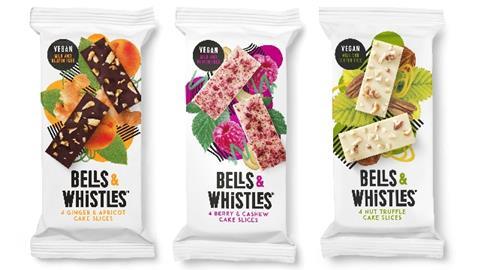 Critique: Vegan and gluten-free cake slices from Bells of Lazonby

Family bakery Bells of Lazonby entered the vegan and gluten-free arena in May 2019 with a trio of cake slices under its new brand, Bells & Whistles.

The slices are available in three flavours:

At the time of the launch, Bells of Lazonby said it wanted to rewrite the rules in the vegan sector with branding and packaging that defy the preconceptions of vegan food.

So, what do the experts think?

“Bells & Whistles doesn’t look vegan at all, despite the fact being mentioned in the corner – this is a very different branding approach compared to Bells of Lazonby’s other products. It’s a clever move, because it’s heroing the product, then noting it’s vegan as an aside. So, the product is the focus, it’s centre-stage, and the consumer feels healthier/greener/better knowing it’s also vegan,” says Clark.

He notes the use of bright, effervescent colours combined with the purity of white, which “really catches your attention”. Hales agrees, saying the bright and fresh appeal is eye-catching.

However, he questions whether it has enough personality to tempt consumers away from their favourite treats. Commenting on both Bells & Whistles and Plantastic, Hales adds: “Neither demonstrate any personality or a reason to choose them over a competitor. Why should we become a convert to either of these brands? We’d probably choose a Nakd snack bar over either.”

A version of this article first appeared on britishbaker.co.uk in July 2019.