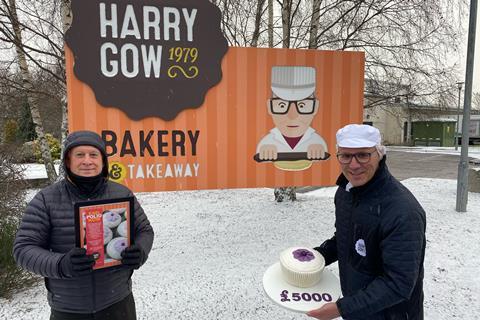 Scottish bakery Harry Gow has helped to raise nearly £5,000 for a polio eradication charity through the sale of cupcakes.

The bakery partnered with the Inverness Rotary Club to support Polio Plus, a charity working to fight polio across the globe.

Sales of vanilla cupcakes topped with purple flowers through the bakery’s 18 stores across Inverness and the Highlands raised £4,300, with the rotary club adding a further £700 to the proceeds.

The funds were raised yet again by the Bill and Melinda Gates Foundation, which matched and doubled the local total to £15,000.

“We have been blown away by the generosity of our customers and staff, who purchased our special cupcakes in their thousands. Polio is a very serious disease, and we are proud to have been asked by Inverness Rotary Club to support the effort to eradicate it worldwide,” said David Gow, managing director at Harry Gow.

“Despite everything that everyone is going through in 2020, it has been heart-warming to see Highland residents coming together to get behind such an important cause.”