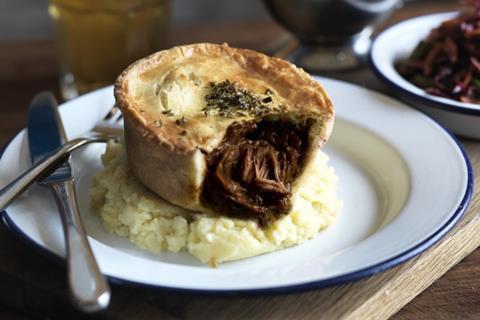 A gluten-free vegetarian pie from Pieminister has been named Supreme Champion at the 2022 British Pie Awards.

Mooless Pie, made by the Bristol-based firm, beat off stiff competition with a record of 976 pies entered across all categories by bakers, butchers, farm shops and piemakers. The winning pie is filled with jackfruit ‘steak’, craft ale, carrot, onion, black pepper, rosemary, thyme and tomato puree.

“Up to now gluten-free pies were always compared unfavourably with other pies,” said chairman of the British Pie Awards Matthew O’Callaghan. “With this pie gluten-free pies are now equal to any other pie. Being vegetarian and gluten free, Pieminister’s Mooless Pie is an ‘everybody’s pie’ be they vegetarian or meat eater, gluten tolerant or intolerant.

“This was a superb pie, it looked good, had a nice even golden bake. The pastry was crunchy complemented by the moist filling which had ‘bite’ and the balance of flavours in the pie was just right,” he added.

A record 151 judges chomped their way through the pies in St Mary’s Church in Melton Mowbray. There were a host of familiar faces on the judging panel including Craft Bakers Association president Neil Woods; Christopher Freeman, past master of the Worshipful Company of Bakers; Megan Roberts, research & development technologist at AB Mauri; and, Mike Holling, sales & marketing director at Birds Bakery.

Pies could be entered into 23 classes including pork pies, steak & ale, game, vegan, gluten-free and dessert with three special awards handed out as well. The Small Producer Award went to Nice Pie of Old Dalby in Melton Mowbray, the Newcomer Award was handed to Radstock-based Dickie’s Pies and the Young Piemaker Award was given to 16-year-old Paul Curran of WeeCook in Carnoustie, Scotland.

Class winners, meanwhile, included a Luxury Christmas Pie from M&S, a Steak & Stilton Pie made by former supreme champion Turner’s Pies, and a Spiced Miso Beef Short-ribs & Sour Cherry one from Bakeshack in Norfolk. For the full list of class winners see below: