Five facts you might not know about Danish pastries 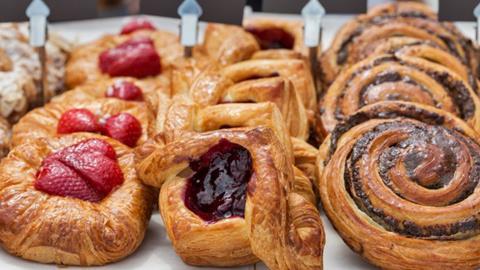 In celebration of the first-ever Danish Week on the Great British Bake Off tonight, we’ve scoured the archives to find five interesting facts about Nordic pastries and rising trends.

From market value to the nation’s bestsellers as well as the definition of a true Danish, here’s what you need to know about those breakfast favourites:

‘Danish pastry’ is an Americanism

The term ‘Danish pastry’ does not necessarily mean the pastries originate from Denmark – it simply means a multi-layered, laminated sweet pastry made in the Viennoiserie tradition.

He adds that Danish pastries have to be proved and will likely have fewer fat layers than puff pastry.

The UK’s three top-selling Danish pastries are part of Lantmännen Unibake UK’s Schulstad Bakery Solutions. They are: Maple Pecan Plait (pictured above), Cinnamon Swirl and Vanilla Crème Crown, according to the manufacturer, which notes due to their wide distribution they are Lantmännen’s top three bestsellers and, by default, the UK’s as well.

Offering advice to retailers and foodservice operators, Lantmännen Unibake UK marketing manager Kate Sykes says: “Consumers love choice, so we recommend stocking a range of flavours. However, to maximise their sales opportunity, it’s crucial that operators stock the best-sellers. Most retailers would be unlikely to consider a drinks fixture without Coca-Cola and it’s the same with pastries.”

Miniature formats of Danish pastries are growing in popularity as they allow consumers who are concerned with portion control to still indulge in a sweet treat, adds Sykes.

Lantmännen, for example, offers a Mini Danish Selection that features smaller versions of its bestsellers as well as a Raspberry Crown and Apple Coronet.

Smaller portions also have the added bonus of being ideal for sharing and snacking on throughout the day, meaning they are able to expand outside of the breakfast occasion.

A taste of the exotic

A comforting hit of cinnamon or maple and pecan might be a familiar breakfast time treat, but some manufacturers are getting experimental, offering more exotic and, in some cases seasonal, flavours.

Aryzta, for example, recently rolled out a trio of pastries comprising a Lemon Danish Plait, a Mango & Passion Fruit Danish Crown and a Wild Canadian Blueberry Danish Crown (pictured above).

All these build on flavours that are familiar to consumers without being too far outside the box that only the really adventurous would want to try them.