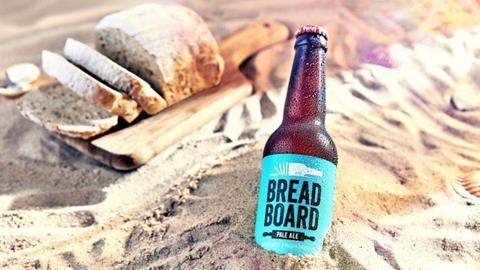 Frozen retailer Iceland has teamed up with Newport-based brewery Tiny Rebel to create a beer made from excess bread.

Bread Board, which costs £1.80 a bottle or £5.00 for three, is expected to use three tonnes of unsold bread over the next year.

It is described as a modern British pale ale with a citrusy tropical aroma and a bitter edge and will be available exclusively at Iceland stores. For every bottle sold, 10p will be donated to environmental charity Surfers against Sewage.

The bread replaces some of the malt in the mashing process, in which the starches in the bread are broken down into fermentable sugars, just as they are in the malted barley. This, Tiny Rebel explained, requires an enzyme found in malt, so the mash is not 100% bread.

However, it noted the bread was not simply a flavouring – it became one of the building blocks of the beer, providing some of the sugars fermented by the yeast to produce alcohol, carbon dioxide and some flavour compounds.

"We’re thrilled to be launching Bread Board with the team at Tiny Rebel Brewery. By using surplus bread in this way, we’re helping to avoid food wastage and ensuring our resources are being used to their very best potential," said Iceland managing director Richard Walker.

“It just goes to show that there’s plenty that can be done with stuff we would normally write off as ‘waste’. In fact, utilising alternative ingredients opens up incredible potential – Bread Board has a uniquely delicate bread note that simply wouldn’t be possible with a traditional all-malt mash,” said Tiny Rebel.

Other retailers have also launched beer brewed with surplus bread. Earlier this year, M&S teamed up with Adnams brewery to sell a range of beers made from discarded bread crusts, while the New York Bakery Co launched a limited-edition beer made with bagels.