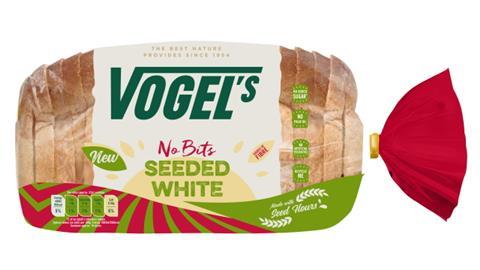 Nicholas & Harris-owned brand Vogel’s has added to its range with a No Bits Seeded White loaf.

The bread is made with milled grains and seeds, and is due to launch in Waitrose on 17 June with an rsp of £1.55.

According to a survey by the bread brand, more than a third (35%) of parents change the bread they buy because their children don’t like ‘bits’, including seeds and grains. The survey also found that almost half (49%) of parents find it easier to get one loaf of bread that their children will eat rather than multiple loaves for the household.

“Not everyone likes the texture of seeded bread and children in particular can be suspicious of bits,” said Ruth McGrath, Vogel’s brand marketing manager. “This deliciously soft white loaf is made with milled seeds and grains, all the taste and nutrition of seeded bread but without the bits.”

It joins Vogel’s other loaves on shelves, which include Seeded Wholemeal, Soya & Linseed and Original Mixed Grain.