Pret A Manger to cut 2,800 roles from its UK shops 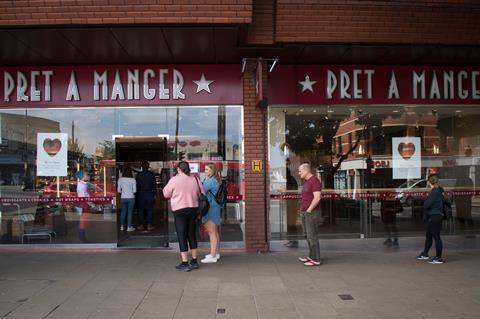 Pret A Manger is set to cut nearly 3,000 jobs in the UK due to the impact the coronavirus crisis has had on trade.

The move, which will see 2,800 jobs lost from its UK shops as well as a further 90 roles cut in its support centre, comes after almost two months of consultations with team members as part of a restructure of the business.

The reduction in roles reflects shorter opening hours, lower transaction levels and losses faced by the business in 2020, the company said.

It follows the decision to close 30 shops across the UK permanently in July.

Weekly sales over the last month for Pret UK are averaging £5 million, the same as in August 2010, when the business was considerably smaller, it added. Trade across shops remains 60% down year on year.

Despite this, sales and footfall have started to show steady but slow signs of recovery, said CEO Pano Christou, who joined the business last year. Since the end of July, weekly sales have grown on average by around 7%.

“I’m gutted that we’ve had to lose so many colleagues. Although we’re now starting to see a steady by slow recovery, the pandemic has taken away almost a decade of growth at Pret,” he said.

Pret said 1,000 roles had been reserved after thousands of team members had moved to a lower level of weekly minimum hours. The hours will be continuously reviewed to reflect levels of sales and footfall during the remainder of 2020 and early 2021.

“We’ve managed to protect many jobs by making changes to the way we run our shops and the hours we ask team members to work. I’m hopeful we’ll be able to review all these changes now that trade is improving again, and I’m encouraged by the improvements we’re seeing every week.”

Despite the reduction in trade, Pret is maintaining a larger number of employees in the UK than 10 years ago. Following the end of all ongoing consultations, it will employ 6,000 people.

Looking forward, Christou remains optimistic that Pret can continue to transform its business model, build on growth and introduce further initiatives in the coming weeks.

“We’ll soon be announcing a number of big changes to help bring Pret to more people. We’re grateful to the government for the support they’ve given our sector, and hope that support will continue as long as possible to give Pret time to adjust,” he added.