Campaigners call on government to limit sugar in baked goods 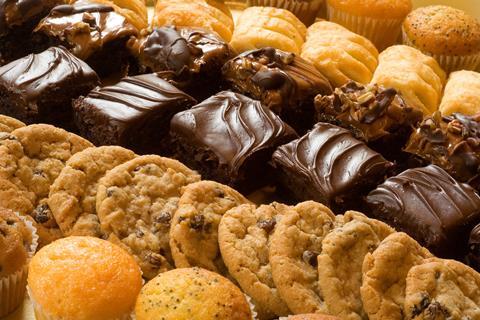 Certain bakery products are ‘dangerously high in sugar’ according to two health campaign organisations, who have called for government curbs on manufacturers.

Action on Sugar, based at Queen Mary University of London, and Obesity Health Alliance, a coalition of more than 40 health groups, have produced a ‘snapshot product survey’ outlining the high sugar content of popular on-the-go sweet snacks sold in both the retail and out-of-home sectors.

Among the bakery products highlighted in the report are the Aldi Specially Selected Triple Chocolate Cookie and the Caffè Nero Belgium Chocolate Chip Brownie.

The former, says the survey, contains up to 10 teaspoons of sugar (39g sugar per 80g serve), which is twice a child’s (aged four to six) daily limit, while the latter has eight teaspoons’ worth (31.2g of sugar per 67g serve).

Also highlighted are Krispy Kreme’s Original Glazed Ring Doughnut and Greggs Glazed Ringed Doughnut, with each containing three teaspoons of sugar per serve (24.2g and 22g sugars per 100g respectively), according to the survey.

Tables from Action on Sugar and Obesity Health Alliance

Both groups are among 40 organisations that signed an open letter health secretary Sajid Javid urging the government to publish its final Sugar Reduction Report outlining the progress made on its targets. They are also calling for regulatory measures such as extending the soft drinks industry levy to the most sugary food categories or introducing a new duty on sugar paid-for by manufacturers, as proposed by Henry Dimbleby in his 2021 National Food Strategy.

“Without doubt, the food industry is not motivated to reduce sugar which means more robust measures are needed to help fix the voluntary sugar reduction programme,” said Holly Gabriel, nutrition manager and registered nutritionist at Action on Sugar.

“Measures such as the Soft Drinks Industry Levy, which has seen a 35% reduction in sugar within just four years, demonstrates the power of government to help reduce population sugar intakes and lower risk of associated health implications,” she added.

Caroline Cerny, alliance lead at Obesity Health Alliance, echoed Gabriel’s call for action, commenting that the government needed to step in with new regulation that “creates a level playing field and financially disincentivises companies from producing and marketing sugary products”.