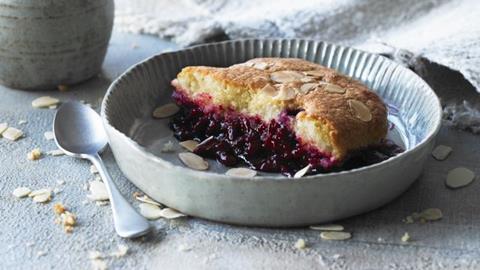 Available exclusively in Waitrose from 5 February, the five-strong range features “much-loved classics”, such as sticky toffee pudding and chocolate fondant, with an rsp of £5.50 per item. Each serves between two to four people and is sold in the brand’s wooden trays.

They take 15-20 minutes in the oven and feature ingredients that Charlie Bigham’s described as being “found in a discerning baker’s pantry”.

“After receiving hundreds of customer requests for puddings, we realised the scale of consumer appetite for traditional sweet dishes, which not everyone has the time or skills to make just as they should be,” said founder Charlie Bigham.

“This is the first time the Bigham’s brand has ventured away from the premium ready meals category in almost 25 years, and this is our way of giving shoppers what they need to round off a tasty meal.”

The launch will be supported by in-store POS, PR and social activity from February onwards. A Proper Puds version of Charlie Bigham’s current advertising campaign, ‘Only Delicious Will Do’, has been developed by creative partners, Creature.

Brand revenue grew by 18% in 2019, according to Charlie Bigham’s, which opened a purpose-built bakery at its London kitchen in October.

It also launched a quartet of full pastry pies that month, having previously only offered pastry-topped ones.