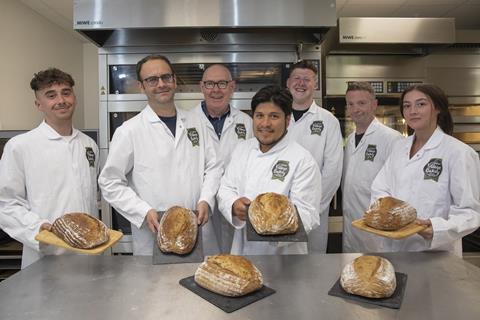 Wrexham-based Jones Village Bakery is on the hunt for 30 new apprentices over the next two years as part of its major expansion plans.

The business has installed a £16m production line, expected to be operational in July, at its 140,000 sq ft bakery on Wrexham Industrial Estate in Wales which will help create 100 extra jobs. Described as a ‘craft bakery line on a bigger scale’, it is the latest addition to the site which was rebuilt following a devastating fire in 2019 and includes a baking academy and innovation centre.

Managing director Robin Jones said he wasn’t necessarily looking for people with “fantastic qualifications” just those who “are driven, who want to learn and who are passionate about baking”.

Jones Village Bakery has partnered with Coleg Cambria to deliver the apprenticeships. Those enrolled will undertake practical training sessions run by bakery specialist Paul Andrew, a qualified assessor with Coleg Cambria. “Some of the best people we have in our business have come through the apprenticeship scheme, all the way through to being bakery managers,” Andrew said.

The company has a track record of ‘growing their own’, it said. Examples of this include Ashley Dawson who joined the firm seven years ago and now heads up the new ‘super bakery’ as well as Florence Roberts, who joined straight from university and was appointed group NPD manager in 2021 having previously developed products for its gluten-free range.

Current apprentices at Jones Village Bakery include 16-year-old Tilly Squire, the youngest person ever to enrol on the scheme, and 25-year-old Callum Whitfield. They’re studying for a Level 2 bakery qualification which group HR manager Jason Page described as “the first stepping stone on their path” which can be followed by Level 3.

“We are now looking for our next crop of apprentices because that is the best way for us to succeed and grow as a business. They are the future of the Jones Village Bakery,” Page added.

The company has previously been praised for its inclusive employment practices which has seen it work with nearby prison HMP Berwyn and Remploy, an organisation which provides employment places for disabled people. It has also targeted school leavers aged 16 and 17 by offering the Real Living Wage of £9.50 an hour rather than the Minimum National Wage for people of that age which is now £4.81.