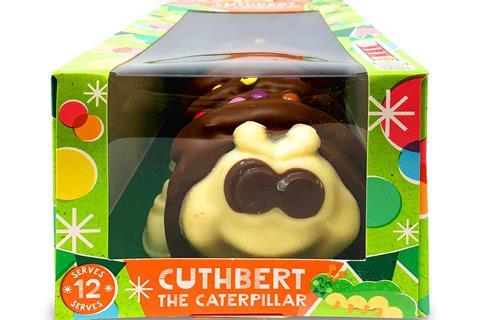 Aldi is launching a special edition Cuthbert the Caterpillar cake in aid of cancer charities in spite of legal action by M&S over the original product.

Last week M&S filed a claim of trademark infringement with the High Court over the product’s similarity to its own Colin the Caterpillar cake.

However, Aldi has confirmed Cuthbert will make a reappearance, with profits donated to Aldi’s charity partner Teenage Cancer Trust and Macmillan Cancer support, which is a charity partner of M&S.

The initial announcement was made via Aldi’s social media channels, with a message aimed directly at its competitor.

“Hey Marks and Spencer we’re taking a stand against caterpillar cruelty. Can Colin and Cuthbert be besties?” the supermarket posted.

“We’re bringing back a limited edition Cuthbert next month and want to donate all profits to cancer charities including your partners Macmillan Cancer Support and ours Teenage Cancer Trust. Let’s raise money for charity, not lawyers #caterpillarsforcancer,” it added.

Aldi said it was also calling on other supermarkets to join it in raising money for cancer charities through the sale of the various rival caterpillar cakes. These include Cecil (Waitrose), Curly (Tesco), Clyde (Asda), Wiggles (Sainsbury’s), Morris (Morrisons), and Curious (Co-op).

M&S responded to Aldi’s post by suggesting its competitor choose another of its product characters as the focus of its charity drive.

“Hey @AldiUK we love a charity idea (Colin’s been a BIG fundraiser for years). We just want you to use your own character. How about #kevinthecarrotcake? That idea’s on us… and we promise we won’t do Keith,” M&S posted.

The original Colin the Caterpillar cake was introduced by M&S in 1990 and has since spawned multiple spin-off products by the retailer, including a female version called Connie.

Announcing its legal action against Aldi last week, M&S said it wanted to “protect Colin, Connie and our reputation for freshness, quality, innovation and value”.