Hovis revamps Best of Both recipe with vitamin D boost 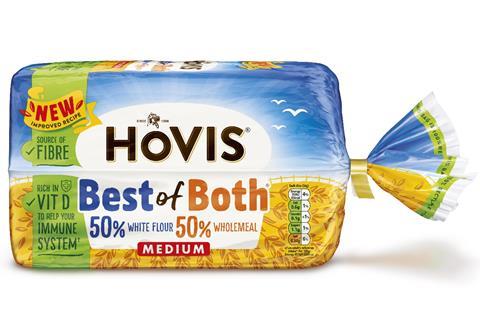 Hovis has revamped its Best of Both loaf with a new recipe and added vitamin D.

The updated recipe will replace the existing one on shelves in January 2021. Two slices of the loaf contain at least a third of the daily recommended dose of vitamin D (which the NHS says is 10 micrograms a day) and calcium intakes. The loaf is also a source of fibre and protein, Hovis added.

Other changes to the Best of Both recipe include the removal of wheatgerm and the addition of wholemeal flour as well as minor changes to yeast and fibre levels.

The move, according to Hovis, is designed to help the nation support their immune systems and tap into consumer demand for food with more added nutrients.

This, in particular, was recently highlighted by analyst Mintel as a key opportunity for the bread market as ‘positive nutritional claims’ become even more relevant to consumers.

“Hovis Best of Both has been a household favourite for nearly 20 years and by adding more nutritional benefits to this tasty loaf, we are supporting families that seek food with more nutritional value. According to a research by the British Journal of Family Medicine, as many as 30-40% of the UK population is vitamin D deficient in winter,” said Nina Shanahan, head of marketing for Hovis.

She added that the new Best of Both recipe complements Hovis’ health-focused range, which includes Fabulous Fibre and Glorious Grains – both of which were launched this year. The latter contains seven types of sprouted wholegrains, including rye, wheat and buckwheat, and also contains natural sources of copper, magnesium, phosphorus and vitamin B1, Hovis added.

Increasing the fibre levels in bread and other baked goods is a focus point for the industry, particularly as many UK consumers don’t meet the recommended daily target of 30g.