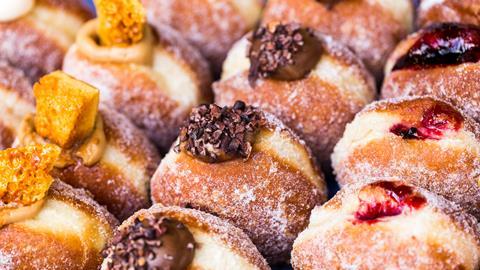 What are the top doughnut trends for 2021?

Dessert-inspired treats to vegan options, over-the-top creations and lighter alternatives for the health-conscious crowd are some of the trends playing out in the doughnut world.

As National Doughnut Week gets underway, we look at some of the trends making waves: 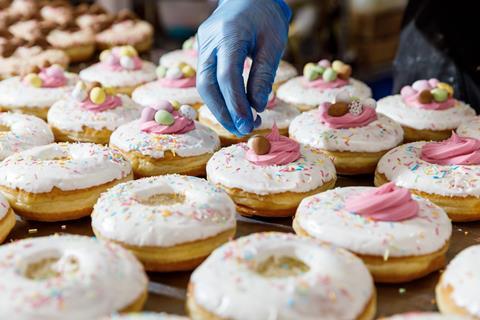 A bag of five-for-£1 jam doughnuts may be delicious but they’re not exactly Instagram worthy. It’s no surprise then that elaborately filled, over-the-top doughnuts have found favour with consumers.

Besides their taste, most of the appeal of these types of premium doughnuts lies in their looks, according to Jacqui Passmore, marketing manager UK and Ireland at Dawn Foods.

“Today’s consumers are demanding more indulgence, more textural combinations, and more product satisfaction,” she explains. “Younger consumers are especially likely to impulse purchase doughnuts with real pick-me-up appeal, oozing with visibly indulgent fillings and that surprise in every bite, with new flavour combinations and a sense of fun.”

It’s a trend that plays right into the hands of Doughnut Time, which is renowned for its indulgent creations, as well as the likes of the recently expanded Planet Doughnut in Shropshire and Derby’s Project D. 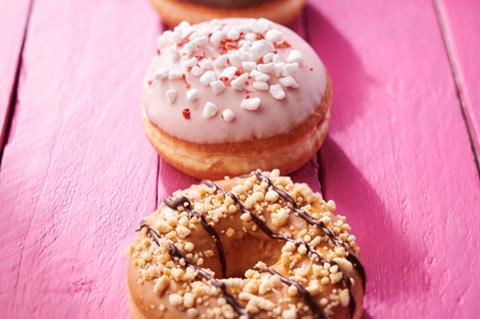 Save room for dessert

Dessert doughnuts are a hot hybrid for 2021 and beyond as players seek to bring nostalgia-inducing flavours onto the doughnut scene. Think Black Forest gateau, cheesecake and more.

“We are going to see more dessert and cake flavour combinations such as key lime pie, rhubarb & custard or raspberry & rose and even apple tart tatin,” says Passmore.

Country Choice is one supplier already tapping into this trend with a range of sweet shop-inspired doughnuts, were rolled out earlier this year, which come in Lemon Sherbet, Rhubarb & Custard and Toffee flavours. Co-op has even got in on the action with a trio of new doughnuts for its summer range. Alongside the Millionaire’s Salted Caramel Ring and Triple Chocolate Ball Doughnut is the Strawberry Pavlova Jam Ball doughnut (rsp £1). It sees a classic jam-filled doughnut topped with strawberry flavoured icing, freeze dried strawberry and meringue pieces. 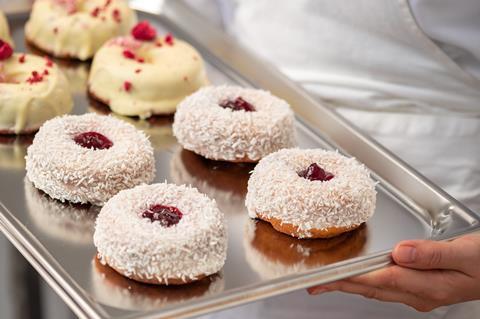 It’s important to be inclusive meaning doughnuts catering to dietary and lifestyle requirements are expected to become more common place.

“Doughnut fans are looking for products to incorporate into their sustainable lifestyle with animal welfare, environmental protection & health being strong social issues with a long-term presence,” says CSM Ingredients. “Vegan doughnuts will be big for this year’s National Doughnut Week, particularly amongst 25-34-year-olds who gave the highest positive response in a recent study when asked how likely they are to buy vegan.” 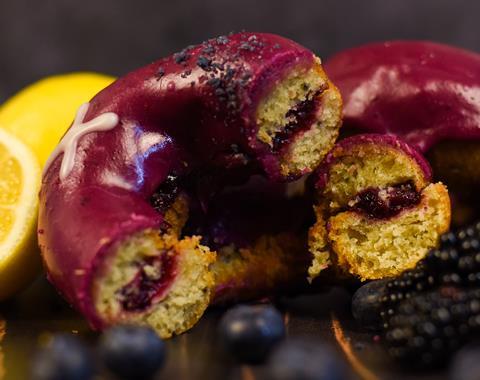 It’s a trend London-based Crosstown is keen to embrace with a blueberry & lemon vegan doughnut (pictured) joining its line-up this month. It features the firm’s first vegan cake dough filled with blackberry and lemon compote before being topped with a blueberry glaze and finished with blue vanilla crumble.

“Crosstown fans have been wanting us to create a vegan cake dough for a while now,” says Crosstown co-founder Adam Wills. “We’re thrilled to be answering their prayers with the launch of our Blueberry & Lemon doughnut. The very first vegan cake doughnut to join the Crosstown line-up, and best of all, it’s available nationwide.”

For Doughnut Time, which has offered vegan options for several years now, the next step was to go gluten-free. As such, it rolled out a 10-strong selection of baked doughnuts earlier this year, all of which are carefully crafted at its dedicated gluten-free facility.

“Doughnuts are a bakery product that many people on a gluten-free diet still have to go without,” explains Lara Thompson, head of product development for Doughnut Time. “Our focus was to create a gluten-free collection that doesn’t skimp on the good stuff.” 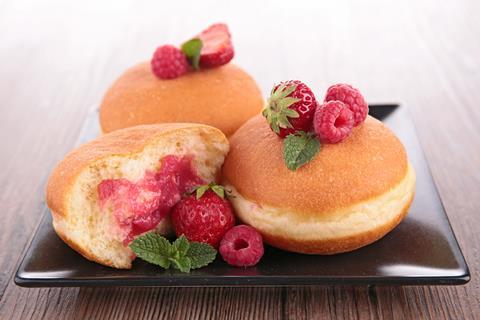 Fully loaded fruit doughnuts offer a touch of guilt-free indulgence, according to CSM Ingredients, with the fruit serving up a healthier and lighter topping to those frequently found in the market.

“Summer berries are a fresh and light way to enjoy a dessert in the warmer months, so will be making an appearance as a healthier doughnut topping this July,” the firm notes.

This is echoed by Dawn Foods’ Passmore who adds: “Doughnuts with fruit fillings and added nuts and seeds with plain icing as a finish appeal more to the health conscious.”

Sourdough doughnuts are also well placed to tap into the trend for guilt-free indulgence, she explains, as they tend to have a less sweet flavour profile and can be “dressed up or down with delicious icings, toppings and fillings”. 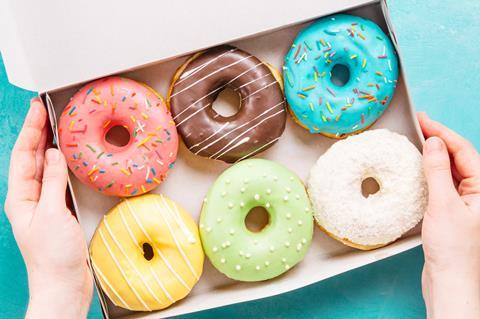 “Neon colours will be big during this year’s charity week, as the unusual hues will get people talking. From swirling purple and pink galaxy glazes, to eye-catching greens and blues, neon doughnuts will be taking over our Insta feeds this July,” adds CSM Ingredients. “Alongside neon, rainbow colours will also be big for this year and will range from bright rainbow shades to more muted pastels.”

What’s more, the bright colours will likely shine bright on social media platforms such as Instagram and TikTok while rainbows can help show support for the NHS and LGBT communities.