Judges for this category assessed the best products developed to meet a specific dietary requirement, such as vegan or free from gluten, sugar or nuts.

Ingleton-based Seasons Bakery based its croissant on a recipe given to owner Dan Nemeth by a friend who had trained in France.

The bakery carefully developed the recipe over a year to ensure high standards were matched with the right ingredients. Using a new vegan butter carefully sourced from a manufacturer in Holland who ships it bulk to the North Yorkshire bakery, the pastry is laminated by hand to create multiple layers, before being rolled and baked.

The Seasons Croissant is free from dairy, palm oil and soya, and the bakery insists it is a “green company and will do everything we can to support the environment”. Vegan pastries are apparently in demand at Seasons and it “wants to have a product available for everyone”.

The development of the croissant meant “working tirelessly to develop a recipe that fits our criteria”, said Seasons, pointing out that its dedication in sourcing dairy-free butter that is also free of palm oil is testament to the bakery’s refusal to compromise on quality. “It is exciting to be able to have a vegan butter – not marg – that will act and work as it should,” it added.

The judges deemed the product to be “a really great croissant” and a worthy winner. “You would never know that it is vegan and dairy free,” said the panel, adding, “it is head and shoulders above what else is out there.”

This Cinnamon & Raisin Bagel is the brainchild of The Gluten Free Bakery. The business was set up in 2012 after co-founder Rana Righton was diagnosed with coeliac disease and found a lack of gluten-free bread options on the market.

A vegan sourdough creation that is not only gluten free, but also free from 14 major allergens, the Cinnamon & Raisin Bagel is produced for foodservice and independent shops, including Whole Foods. The bakery believes there are no comparable bagels on the market and said many customers claim it’s the best bagel they’ve ever eaten, gluten-free or not.

The judges remarked that the product really delivered on taste and had a great crumb structure. They also commended The Gluten Free Bakery for creating a bagel of such quality from gluten-free dough that has no elasticity and is extremely challenging to work with as it so easily falls apart in the boiling process. 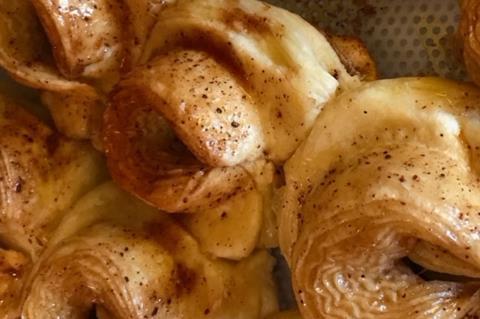 According to Beefcake Café, which produces the Vegan Cinnamon Bun in Glasgow’s West End, the dietary requirement the product chiefly addresses is “the need for a good bun”. However, the company concedes that Glasgow has a very significant vegan following and “we would be silly not to address this”.

The fact that the non-vegan cinnamon bun offered by the company has always been its most popular item also made the addition of a vegan version something of a no-brainer.

The baker said the major challenge was the lamination technique for the bun, which it worked hard on to ensure consistent results. Finding the right ‘butter’ was also key to the success of the product, Beefcake Café added.

The bun met with favour from the judges, who commented that it was very nicely baked, had a good weight and, most importantly, tasted wonderful.